How I automated the boring parts of life

I have a bad habit: waiting until the last minute to do things. Like, last month I had to fly to New York to run a 193 mile relay race. I knew about the trip for almost 6 months, but didn’t buy plane tickets until 3 days before, at 4x the cost. True dedication to the art of procrastination. You can call me somewhat of an expert, and it’s one of my biggest shortcomings.

It’s not because I’m lazy- in fact, the exact opposite is true. I’m incredibly productive. I move fast, but I single task. I don’t bounce around with a million things at once because of the incredible cost of context switching. Spending time planning trips, picking flights, and buying tickets just doesn’t really seem important to me until it’s 3 days away.

Paying $700 bucks for plane tickets, though, when they should have cost $200, isn’t the best move- so I’ve spent the past month trying to get a handle on my procrastination.

Self-discipline and Willpower. Two words that aren’t the solution. You only have a fixed amount of self-discipline and after it’s been used up, you need to wait for it to recharge. If you “fix” a personality defect by brute-forcing with self-discipline, you’ll be back in the same boat a week later.

I broke the cycle of procrastination and willpower exhaustion by automating the things I was putting off. Yup, I threw money at the problem, and it was cheaper than you think.

Get a personal assistant #

Hold off your judgement for a second. I’m still new to the assistant thing, but it easily falls into the 10 most effective life changes I’ve ever made. Within the first 24 hours of having an assistant, I delegated 2 tasks that had been marinating in my todo list for months. You know, the thing you say you’re going to finally get done every time Monday rolls around? Well last Monday, it finally got done all I had to do was send an email. Mind blowing.

Total cost? $25 DOLLARS A MONTH. The service I use is FancyHands and it paid for itself on the first day.
(That’s an affiliate link- You get 50% off, I get $10 when you signup. I have no ties with FancyHands).

Think it’s ridiculous? So did I, but it ended up changing my entire workflow. Like, I just had them book an AirBnB place for a trip next month. Next month! This is coming from a guy that was buying plane tickets days before a trip.

If it doesn’t end up being useful you can just have your assistant email me about how much I suck. Might as well get your monies worth.

Maybe you’ve heard of it, maybe you haven’t, but Amazon lets you setup reoccurring orders that get shipped automatically. It takes like 5 minutes to setup and has saved me so much frustration. I used to be the guy running to Target on the way out to buy a little thing I like to call “emergency deodorant”. I’ve found myself standing in the deodorant aisle nonchalantly applying some Old Spice before taking it up to the register more times than I can count.

It was surprisingly hard to come up with ideas for using Subscribe and Save, so if you need some inspiration, check out the list of things Amazon automatically sends me. Fair warning: It’s hilarious to open your door to a UPS guy carrying a 40-pack of toilet paper, IN THE ORIGINAL PACKAGING.

Automate the things you hate #

Even though I really enjoy writing, I despise proofreading and editing. Like to the point where I rather just not write at all so I don’t have to deal with the proofreading part. Nothing kills my flow more than having to re-read what I just wrote 1000 times.

Even though the book I’m working on has been an overall success, one of my biggest failures with the project has been not proofreading it. I’d fall into the cycle of just not writing, so I wouldn’t have to proofread.

Instead of fighting it with willpower, I automated it. How? I tested both Mechanical Turk and Fiverr as proofreading platforms. Fiverr cost a total of $50 to have 62 pages edited. Just to give you an idea, editing 62 pages is my idea of a personal hell. But for less than a dollar/page, all of my hesitation, doubt, and negativity vanished.

Try it out today #

You can automate almost all of the boring parts of your life, today, for less than 25 bucks and half an hour on Amazon. And make sure to have your assistant email me telling me how much time I saved you. 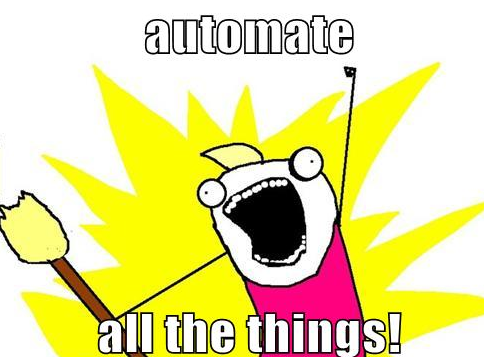 The most interesting people are “local”

I used to frequent a small sandwich shop, O'Bagelo’s. The owner and only employee, John Vito, was a miser and philosopher of sorts- he’d make interesting and thought provoking conversation while crafting your lunch. “The most interesting... Continue →